How do Christians Reconcile LGBT Affirmation with these Verses?
Article by Gena M. Minnix, Ph.D. 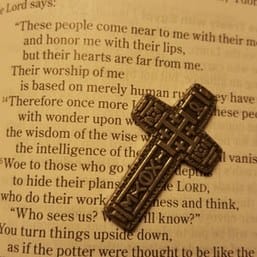 ​In my volunteer role with the Human Empathy Project, I’m frequently asked how Christians reconcile LGBT affirmation with certain Biblical scriptures. Christians look to the Bible for guidance and wisdom, and conservative or Evangelical Christians in particular hold a very high view of scripture. The Christian Bible consists of the Old Testament written mostly in ancient Hebrew and the New Testament written in koine Greek. The Bible was translated and published in English for the first time in the 1500’s, working from Hebrew and Greek manuscripts, and sometimes referring to Latin and German versions for assistance. Over the centuries, multiple translation decisions have influenced the way in which the original texts are read and taught in English.

Here are some of the factors that may influence our understanding of a particular verse:
​
Many Christians today are praying for clarity around verses that speak to same-sex behavior, and consulting the original languages to discern what God may be saying.

"Evangelicals hold a distinctive belief
in the priesthood of all believers;
it is commonly believed we can read and interpret scripture ourselves, with help from the Spirit,
​and input from the larger Christian community."

For English speakers, widely-used translation tools include Interlinear Bible resources, which display the original vocabulary and English translations word-for-word, and Strong’s Exhaustive Concordance, an index in with cross-references for words found in the text. Independent study is not a substitute for consultation with linguistic and historical experts; nevertheless these resources can provide assistance when coupled with prayer and spiritual discernment practices. Hermeneutics is a term for the theory and methodology of text interpretation. Exegesis is a term for the process of drawing out an interpretation from the original vocabulary, context, and discernible meaning of the author. Evangelicals hold a distinctive belief in the priesthood of all believers, and it is commonly believed we can read and interpret scripture, ourselves, with help from the Spirit, and input from the larger Christian community.

Among Bible scholars, there are two ways of viewing these scriptures--one based on a literal reading of modern English translations, and another that consults the original language, context, and other scriptures. The view based on the original language holds that the verses which speak to same-sex behavior are in fact condemning homosexual rape, exploitation, or sexual abuse--relationships which bear little-to-no resemblance to loving same-sex relationships.


English Translation vs. Original Languages
​
Note: Scriptures here are from the English Standard Version – ESV. The stated intent of the ESV translators was to create an “essentially literal” translation while taking into account differences of grammar, syntax, and idiom between current literary English and the original languages of Hebrew and Greek. Strong’s Numbers refer to Strong’s Exhaustive Concordance, Hebrew from Old Testament and Greek from New Testament.

Genesis 19: 5 And they called to Lot, “Where are the men who came to you tonight? Bring them out to us, that we may know them.”

Jude 1:7 just as Sodom and Gomorrah and the surrounding cities, which likewise indulged in sexual immorality and pursued unnatural desire, serve as an example by undergoing a punishment of eternal fire.

View Based on Original Language: Condemns the ancient harmful practice of men raping town visitors in a show of domination and humiliation.

Note: The word translated “know” is Strong's #3045 Hebrew word yada; used in other versus referencing to sexual intercourse.

Leviticus 18: 22 You shall not lie with a male as with a woman; it is an abomination.

Leviticus 20:13 If a man lies with a male as with a woman, both of them have committed an abomination.

View Based on Original Language: Condemns the ancient harmful practice of heterosexual men engaging in religious rituals that exploit other men sexually and treat them as servants or property.

Romans 1:25-27 ... because they exchanged the truth about God for a lie and worshiped and served the creature rather than the Creator, who is blessed forever! Amen. For this reason God gave them up to dishonorable passions. For their women exchanged natural relations for those that are contrary to nature; and the men likewise gave up natural relations with women and were consumed with passion for one another, men committing shameless acts with men and receiving in themselves the due penalty for their error.

View Based on English Translation: Condemns same-sex attraction and acts as "unnatural".

View Based on Original Language: Condemns the ancient practice of heterosexuals engaging in religious sexual rituals with one another. For heterosexuals to engage in same-sex practices for religious or economic gain is going "against their nature".

1 Timothy 1:9 understanding this, that the law is not laid down for the just but for the lawless and disobedient, for the ungodly and sinners, for the unholy and profane, for those who strike their fathers and mothers, for murderers, the sexually immoral, men who practice homosexuality, enslavers, liars, perjurers, and whatever else is contrary to sound doctrine.

View Based on English Translation: Condemns men who engage in same-sex practices.

Note: The two words commonly translated “men who practice homosexuality” are the Greek malakoi (Strong's #3120) meaning soft, commonly referring to young boys kept or prostituted for sex, and arsenokoitais (Strong's #733). Arsenokoitais has no direct translation and scholars believe it to be a slang word Paul likely coined, as it appears no where else in Greek literature. King James translators chose the word “abusers”; Worrell and others chose “sodomites” i.e. rapists. In mid-20th century, the NIV, NAS and others began translating it as “homosexuality” for the first time. The word in Greek combines two words:  arseno - "male” and koitais - "many beds”.

"Pastoral teams are often seeking to create an environment where folks can arrive at different conclusions about these scriptures, while affirming and supporting LGBTQ individuals, couples and families."

Many churches are attempting to create an environment where differing views on these scriptures can be acknowledged and discussed openly, while still creating safety and affirmation for LGBT members and couples. I'll attempt to summarize the scriptural case for LGBT affirmation:

“Sin is any act that separates us from God, causes harm, and/or damages spiritual health, i.e. "misses the mark" of love. Love and marriages which contribute to health, wellness, and spiritual growth don't fit this definition. The verses condemning "homosexuality" are important for us to follow, however, because they condemn sexual acts that abuse, exploit or harm someone of the same gender. A healthy relationship is not determined by physical anatomy but by faith, commitment, and the fruit of the spirit: love, joy, peace, patience, kindness, goodness, faithfulness, gentleness, and self-control. This view is consistent with scripture, the gospel of Christ, and the teaching of Paul in 1 Cor. 13."

Pastoral teams are often seeking to create an environment where folks can arrive at different conclusions about these scriptures, while affirming and supporting LGBTQ individuals, couples and families. For guidance, check out Resources for Pastors and Church Leaders.

More from Evangelical leaders on  interpreting these scriptures:
Changing Our Minds by David Gushee, Evangelical Ethicist

Why I Changed my Mind by Danny Cortez, Southern Baptist Minister